May 2018 will go down as one of the worst months for me and my family so far. I have never been as sick, nor had the whole family be this sick, in all my life! This was the month that being a WAHM (Work at Home Mom) proved that our family decisions were made for the right reasons.

The Great Illness of May 2018 Begins

My son started with the sniffles on the long weekend in April, soon after my daughter followed. Actually the stress and great illness started before this… 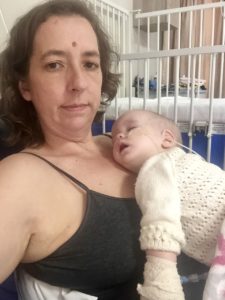 Bianca with Ayla in hospital.

My 8 month old (at the time) daughter started having what appeared to be seizures at the end of February. By the time we managed to video one and send it to the neurologist on 20 April, she had had 18 seizures. Once the neurologist saw the video, he immediately moved up her appointment and got the ball rolling to have Ayla tested. She started seizure medication in the interim and it looked like things were going to be ok. Then the sniffles started…

Kyle was miserable and getting fevers and as per usual refusing to take any medication except Neurofen (what’s with four year old stubbornness?). Then Ayla started with the same symptoms. After a weekend of her struggling to breathe, I took her to the GP who prescribed some meds and said to keep and eye on her. Well two days later there was no real improvement, and I ended up taking her to the emergency room. She was admitted because her oxygen saturation was so low, they insisted she must be in more distress than she was giving on. Clearly I have a strong little cherub in this one! Her being ill meant that the MRI that had been scheduled by the neurologist had to be rescheduled because she couldn’t go under anaesthetic with a chest infection.

So started our seven days in hospital. Most of those days were spent like the photo above. My sick, baby girl asleep on my chest, as I tried to get work done on my phone. Being a WAHM meant that I didn’t have to ask anyone for leave to look after my kids, or take time off to take them to doctors appointments.

Being a WAHM was a lifesaver

The fact that I could manage my business as best I could from the couch in my daughter’s ward, was amazing. I could respond to clients, book venues, liaise with my VAs. Because I run an online business, I was able to try and keep a handle on things, even when I ended up downstairs in Casualty myself with a fever of 39.1C. Why do we as moms always put everyone first when it comes to illness etc?

I have so much appreciation for the VAs in my team and the encouragement I received from them. All being WAHMs, it meant they completely understood what it means to put your family first.

Since we were already in hospital, and the paediatrician had given Ayla the go ahead for discharge , the neurologist suggested we stay the extra two nights, since they had managed to schedule Ayla’s MRI for that week. So we spent a full 7 nights in hospital! In that time my baby had an ECG to confirm that it wasn’t her heart involved in the seizures (and to confirm that it wasn’t a heart defect causing her to be the petite, little thing she is). She had 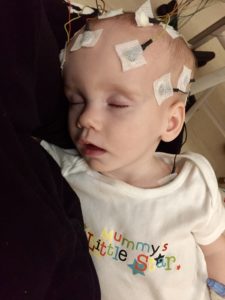 an EEG to get a baseline for her brain patterns. What a palaver that was getting her to sleep – she fights sedatives like nothing I’ve ever seen. It takes her a full 3 hours to fall asleep after getting oral sedatives! That’s a lot of pacing the hospital corridors with a baby in the carrier!

She then finally had her MRI on the last day, and we were able to take her home.

Her heart is fine.

Her brain is fine!

There’s a 70% chance that she will outgrow the epilepsy and the seizure medication will most likely keep it controlled for the two years it will more than likely take for her to outgrow it.

So at least on that front we were sorted and the stress levels relating to that have dropped dramatically.

However soon after we got home she started with fevers again. As did my husband and I. And my four year old was still coughing, snotting and generally not 100% either. We had another two solid weeks for everyone in the house taking turns with being ill and at the worst phase of this cyclical virus! Thankfully my husband and I never were on our worst days on the same day!

Finally on the last weekend in May did it finally feel like we were turning a corner! Ayla got the all clear from the Paediatrician on the 30th! My son was definitely back to his old, busy, non-stop self by his fourth birthday party on 2 June. I spent this week with no voice, which my family found hysterical! I’m a regular chatterbox, and this was a very hard week for me.

And I can finally say that I’m on the mend this week! As can my husband!

So this blog post is part an insight into what my last 6 weeks have been like, and part and apology to clients and team members. The benefit of being a WAHM (Work at Home Mom), is that it was easy for me to just drop everything and focus on my children and family when they needed me most. But on the contrary, it has meant that I have left clients in the lurch, and I have dropped the balls a bit with my business. For that I am truly sorry!

I am now firmly on the road to recovery and focusing on building my business again. Sometimes working from home can be hard, but this past month has reminded me why I wanted that for myself and my family. It gives me the space to be there and for my family when they need it most. And that is the biggest benefit of being a WAHM!

Posted in About Us, Virtual Assistance

I'm Mom to two, wife to one, and the brains behind WAHM WorkSpace. A self taught digital native with a knack for translating concepts. I speak creative and tech, and work at marrying the two both in my personal and professional life!